In shocking news, Terry Booth is stepping down from his role as CEO of Aurora after seven years and countless waves of both failure and success in the HIGH-level Position, the company announced the shocking news this Thursday.

Booth will be replaced by the Edmonton-based company’s executive chairman, Michael Singer, on an interim basis. Booth shall remain on the company’s board in a strategic advisory role.

Aurora in a recent press release also confirmed it will reduce its workforce by 500 staff, including 25% of all corporate positions. The change at the top comes as the pot giant looks to press the reset button following several quarters of disappointing sales and mounting losses. 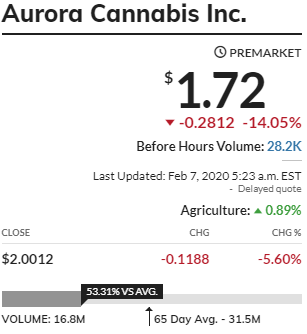 In addition to the job cuts and executive moves, Aurora said it plans to cut spending on various information technology projects, sales and marketing initiatives, travel and entertainment and professional services which do not provide an immediate impact on its revenue.

Over the past year, Aurora’s stock has tumbled more than 70% as investors’ enthusiasm about the cannabis sector dimmed. This came as producers failed to demonstrate a pathway toward profitability. Regulatory mishaps, stemming from a non-compliance disclosure by  CannTrust Holdings Inc., also contributed to the fading enthusiasm.

The company released preliminary second-quarter results and now plans to report between $50 million to $54 million in net revenue in the quarter, far below analyst expectations.

[…] is becoming evident that even large fish are struggling in the cannabis market. It may become apparent that large sums of money and a reputable brand […]

[…] Read More on that Topic: cannabisnews.co.za/aurora-ceo-throws-in-the-towel-and-takes-500-employees-with-him/ […]

[…] Here you will find 32389 additional Information to that Topic: cannabisnews.co.za/aurora-ceo-throws-in-the-towel-and-takes-500-employees-with-him/ […]

[…] Info to that Topic: cannabisnews.co.za/aurora-ceo-throws-in-the-towel-and-takes-500-employees-with-him/ […]

[…] Info on that Topic: cannabisnews.co.za/aurora-ceo-throws-in-the-towel-and-takes-500-employees-with-him/ […]

is plenty of fish a gay dating site? https://gaypridee.com/

[…] Information to that Topic: cannabisnews.co.za/aurora-ceo-throws-in-the-towel-and-takes-500-employees-with-him/ […]

steps to writing a dissertation

write my dissertation uk help i can

[…] Find More to that Topic: cannabisnews.co.za/aurora-ceo-throws-in-the-towel-and-takes-500-employees-with-him/ […]

Until our Bongs Break do we Part